KNOW A LITTLE ABOUT OUR HISTORY

LAEDE – Laboratory of Acoustics and Dynamic and Static Tests, was founded in 2012 and is part of IEME Brasil Engenharia Consultiva. With the experience acquired in instrumentation and monitoring of civil and metro-rail structures, LAEDE was created to meet the demand in Brazil in static and dynamic mechanical tests of high capacity performed in the laboratory.

LAEDE performs tests in the metroferroviária area and was responsible for the homologation of the permanent track components of several Metrô and VLT systems, cargo and passenger railways throughout Brazil. Along with IEME Brasil, LAEDE monitored numerous civil structures in the country, such as bridges and viaducts, stadiums, dams, buildings and monuments. Several researches and product development were carried out through laboratory tests and mathematical modeling.

We have a competent and experienced team to respond to requests with agility, quality and low bureaucracy, following the current international and national standards.

The Management of IEME Brasil is committed to improving the development of services, with continuous improvement of its effectiveness, good professional practices and control of significant environmental aspects, seeking to ensure its competence, environmental preservation through pollution prevention actions and compliance with the objectives of the Quality, Environmental and Occupational Health and Safety Management Systems, as well as the requirements of ABNT NBR ISO 9001, ABNT NBR ISO / IEC 17025, ABNT NBR ISO 14001, OHSAS 18001, applicable laws and other subscripts.

Meet the needs of the client and stakeholders in the definition and implementation of their requests, as agreed, focusing on agility, communication, quality and impartiality, seeking to exceed their expectations.

Preserving the health and safety of contributors, in addition to promoting the training and awareness of the importance of each one’s contribution within the organization in the implementation of the documentation, policies and procedures of the Systems of Quality Management, Environmental and of Health and Occupational Safety.

CERTIFICATION OF THE QUALITY MANAGEMENT SYSTEM

LAEDE is part of the Brazilian Network of Testing Laboratories (RBLE), being a Laboratory accredited by Cgcre according to ABNT NBR ISO / IEC 17025, under the number CRL 1344. We are the only Laboratory in Brazil to have this accreditation for the sleeper and rail weld tests of our scope.

See our scope of accreditation: http://www.inmetro.gov.br/laboratorios/rble/docs/CRL1344.pdf

The goal of this world reference is to promote confidence in the operation of laboratories. In this way, hiring a laboratory that has accreditation is a guarantee that it is technically competent and capable of generating highly reliable results. 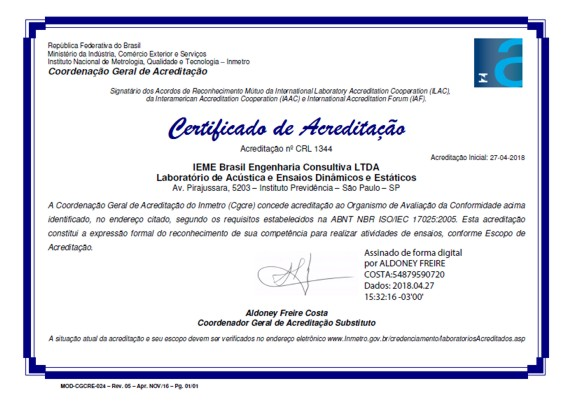